The municipality of Péribonka is located on the territory of the MRC of Maria-Chapdelaine in the Saguenay-Lac-Saint-Jean region. 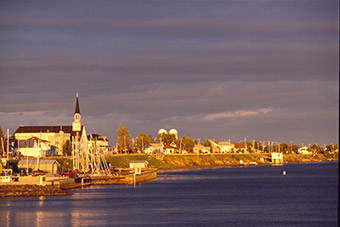 The municipality has a history intimately linked to the river that plies its landscape. Its original Algonquin name, pelipoko (one can meet the pelipaukau variant), means “river digging in the sand, where the sand moves”. The Péribonka River is the largest tributary of lac Saint-Jean. It takes its source in a marshy area near the Otish Mountains near the 52nd parallel. It was in 1673 that the Jesuits Francis de Crespieul and Charles Albanel officially settled in Péribonka. The name Péribonka appears for the first time in April 1679. The territory bordering the river is then traversed by impetuous adventurers in search of furs and by many trappers traveling towards the Hudson Bay.

The birth of a village

The village of Péribonka was found in 1888, during the last phase of colonization of Lac-Saint-Jean, when the families of Édouard Niquet and Édouard Milot settled. It is this era that is describe in the pages of the novel written by Louis Hémon.

As soon as the 1921 novel was published in France, people became enthusiastic about the heroic life of the settlers of Péribonka, who tirelessly pursued the hard task of “making land”. Between 1941 and 1953, three dams were built near Péribonka: Chute-des-Passes, Chute-du-Diable and Chute-à-la-Savane. These dams allowed the creation of the Péribonka reservoir, which will supply the Alcan company with energy. 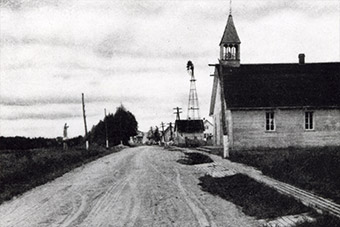 The main street of Péribonka around 1910

The prosperity of the village is due, among other things, to the potato culture, which becomes the trademark of Péribonka. The municipality also benefited from the intense logging that Price carries on the upper reaches of the river, as well as timber floating operations for pulp and paper mills. Beginning in the 1940s, massive dam construction projects and hydroelectric power plants to supply regional aluminum smelters create positive economic spin-offs.

The challenges of a changing world

The second half of the 20th century brings new challenges. In 1997, the timber flotation activities were closed due to environmental considerations. The municipality invests in the development of recreational tourism infrastructure, including the Louis-Hémon Museum, the municipal marina, cruises between the marina and the Pointe-Taillon National Park, and the municipal campground. If the novel Maria Chapdelaine has allowed the municipality to carve a place on the world stage, the village has been recognized since 1955 as the official starting point of the prestigious “Traversée internationale du lac Saint-Jean” swimming marathon.

Free translation of an excerpt from the web site : www.peribonka.ca

The territory of the MRC of Maria-Chapdelaine is located northwest of Lac-Saint-Jean, and covers an area almost as large as Switzerland (40,000 km2) which ranks fifth in importance in Quebec. From a biophysical point of view, the MRC is characterized by large forested areas on agricultural plains and an imposing hydrographic network, including the great rivers of the Saguenay-Lac-Saint-Jean region and over 8,000 lakes.

The population of the MRC, of about 25,000 inhabitants, is concentrated in the south of the territory in the two cities and the ten rural municipalities that form the municipalized environment. The MRC also covers an immense forest area, commonly known as Unorganized Territories. This second set making up the MRC belongs to the public domain.

Occupation of the territory

The beginnings of the occupation of the territory of the MRC of Maria-Chapdelaine go back to the 17th century with the colonization of the Saguenay-Lac-Saint-Jean when explorers and missionaries traveled this vast territory. Louis XIV, king of France, seeing the enthusiasm for the fur trade, instituted the territory of the “Domaine du Roy’’. Stretching from the St. Lawrence River to James Bay, it became a sort of administrative region reserved exclusively for the benefit of the State on the fur trade. The actual colonization of the territory would begin later due to the depletion of the resource and the recognition of the agricultural potentialities of land. It was around the 1800s that the region, including the MRC of Maria-Chapdelaine, was open to colonization. Until 1878, despite the crossing of the Ashuapmushuan River, human settlements were still shy. In 1892, following a new wave of colonization, the Trappist Fathers settled on the banks of the Mistassini River. From 1895, colonization continued eastward in the municipality of Péribonka and until the first half of the twentieth century in the other municipalities of the MRC. The new settlers cleared their site for settlement and agricultural purposes. Primary activities related to the exploitation of natural resources and the development of the hydrographic network has facilitated the settlement of new populations.

Today, the agrarian and forestry history of the MRC of Maria-Chapdelaine continues in the exploitation and the development of this territory. Its biophysical characteristics and the artificialisation of the environments have drawn the homogeneous agricultural sectors which concentrate in the south and around municipalities such as Albanel, Normandin and Saint-Edmond-les-Plaines. Forestry, on the other hand, is particularly present in the northern ring of the MRC’s municipal territory.

Free translation of an excerpt from the web site : www.mrcdemaria-chapdelaine.ca